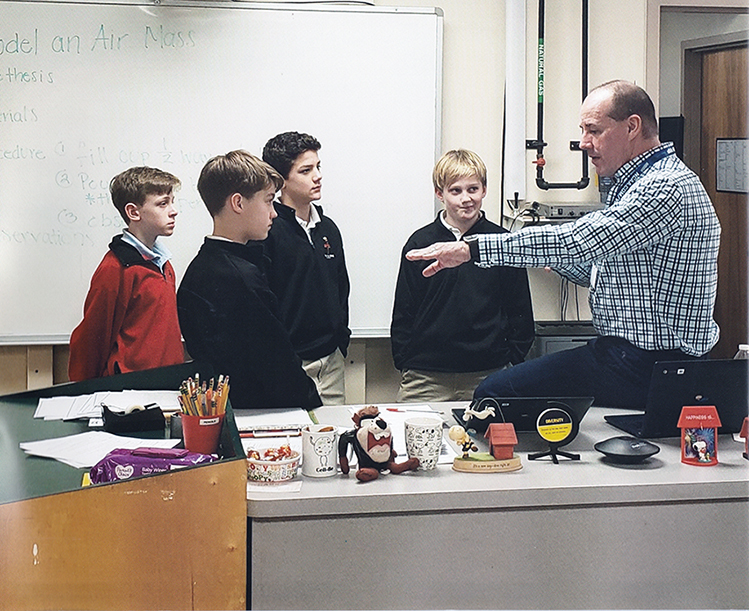 Brian Knoop has taught science and physical education at seven Catholic schools in Nashville during his 40-year career as an educator. But his lessons went far beyond those subjects.

Knoop, who retired from his last teaching stop at Christ the King School in May, started every classroom day by putting one word on the classroom board and talking about it for five minutes.

“It might be a piece of scripture, or something motivational like the word ‘respect’ in all caps,” said Knoop. “And if it was something that they remembered, then I knew I had won.”

And remember they did.

“I still have former students who are now in their 50s, and they come back to talk with me and recall how I shared this thought or that one with them,” said Knoop.

Two of his students at Christ the King were among the many who have taken the lessons to heart. During an All-school Mass on May 25, when the school honored Knoop, eighth grader Parker Casey said, “It is hard to say a few words about someone who is such a great teacher. We all know him to be wise, engaging, kind-hearted and understanding.

“One of his first lessons is about respect, and that is his most important lesson, which sticks with every student that has had him as a teacher.”

Seventh grader Ava Francescon also spoke about Knoop’s impact on his students. “The past three years in class with Mr. Knoop has been a fun experience, but most importantly he has taught us all very valuable lessons,” she said. “He has preached to us to respect ourselves, others, and everyone around us.”

Her favorite part of class, said Ava, “and one that really connected us all together, was every day before class begins we would read a quote or passage from a book or something he found online.”

“I could blabber on about a lot of fun and exciting things that have happened in Mr. Knoop’s science lab, but you get my point of how much Mr. Knoop loves us like his own and the lasting impact he has made in our lives and in our hearts.”

Knoop, a native of Louisville, Kentucky, attended Catholic schools from kindergarten through high school. But teaching wasn’t the first plan for his life. After college, he worked for 18 months as a sportscaster.

Then he changed course. “I realized my true calling (teaching) and stuck with it.”

Knoop reflected on the road that led him to Nashville for – well –life.

“My first teaching job was at a privately run high school in Arkansas, where I taught physical education and coached the basketball team,” Knoop said of his time at Lee Academy in Marianna, Arkansas.

He followed that first job with another one in privately-run, non-denominational education, then moved to Nashville in 1983. Knoop’s reasons for moving here were many, most notably he said, “It is such a nice place and close to family.”

Knoop got his first teaching job in a Catholic school at Christ the King after serving as a substitute teacher at several schools in the Diocese of Nashville. “This was something that helped me get my foot in the door,” he said. He considered teaching in public schools but decided to stay in Catholic schools instead. “I was comfortable in my faith,” said Knoop.

Over the years, Knoop spent time at several Catholic schools in the area, including Overbrook School, where he also served as the basketball coach at St. Cecilia Academy; St. Edward School as its principal; Pope John Paul II High School; Father Ryan High School, where he also worked in admissions; St. Bernard Academy; and St. Henry School, where he received the 2011 Christ the Teacher Award from the Diocese of Nashville Catholic Schools Office recognizing excellence in teaching.

He taught in Catholic schools “for 34 of my 40 years in education,” Knoop said. He finished his career, where he started in Nashville – Christ the King – teaching science to fifth through eighth graders for the past three years. “I’ve come full circle.”

When asked to compare private schools to Catholic ones, Knoop noted “there are not really any major differences, excepting that the parents run private academies, and the Church runs ours.”

He has seen much improvement in the diocesan schools during his years in the classroom. “The diocese is stronger now than it was (when he started), and we have evolved … really strong marketing for private school education as opposed to the public model,” said Knoop.

Diocesan schools “have become very competitive,” he said. “Some of our schools have expanded,” and several new schools have been opened during his time in Nashville.

The new retiree also credited the schools’ growth “to good parental support and a strong sense of community, but we can only be as good as the leadership at the top – which is our bishop and our principals,” observed Knoop.

“The community aspect is also important,” he added. “The Church and the school must be in harmony, and that includes our pastors as well.”

Like his blackboard talking points, Knoop’s decision to retire was equally reflective and simple.

“My wife, who taught at Vanderbilt for 43 years, retired this year, and although I originally was going to work one more year – she asked me to join her in retirement,” said Knoop, who will turn 64 in August.

In addition, last month the couple’s only daughter got married.

“My advice is the old advice; never put off ‘til tomorrow what I can do today; life is short – do it now,” said Knoop.

Sherry Woodman, Knoop’s principal at Christ the King for the last three years, was happy when he applied for a position at her school.

“When I first received his resume in 2018, I thought to myself, ‘How did I get this lucky?’” said Woodman.

“Over the past three years, Brian has strengthened our science program and motivated the students to think and question during their investigations,” said Woodman. “We are proud of the fact that Mr. Knoop began and ended his Nashville career at CKS,” she said. “Brian’s retirement is bittersweet because we are happy for Mr. Knoop and his family but sad for us.”