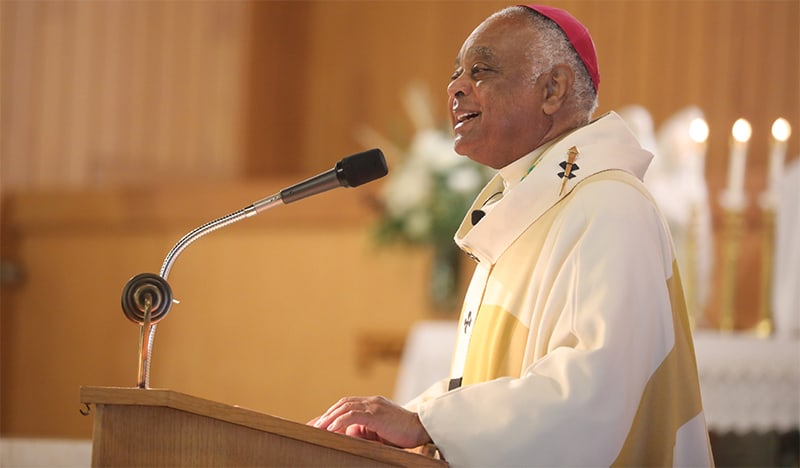 Archbishop Gregory will be the first African American cardinal from the U.S. Other new cardinals are from Italy, Rwanda, the Philippines, Chile, and Brunei 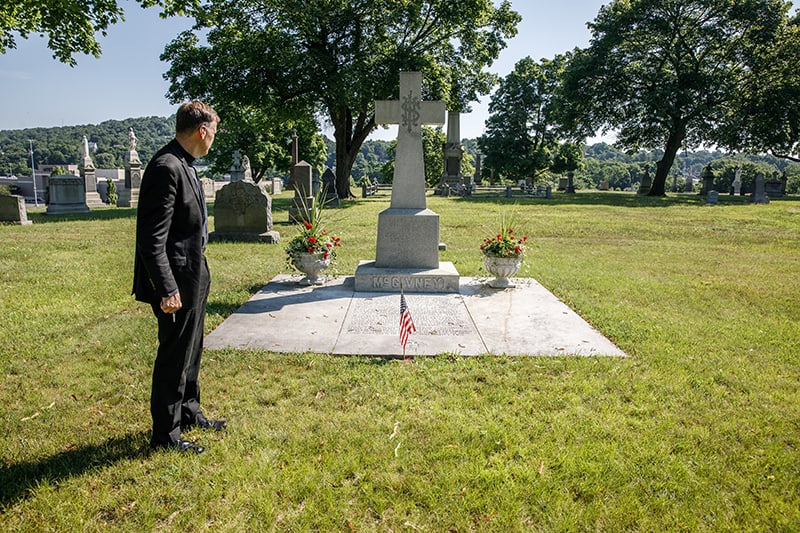 Father James Sullivan, rector of the Basilica of the Immaculate Conception in Waterbury, Conn., stands at the McGivney family grave site in the Old St. Joseph Cemetery in Waterbury July 6, 2020. Father Michael J. McGivney -- who was buried there for 92 years until his body was moved to St. Mary's Church in New Haven, Conn. -- will be beatified Oct. 31 during a Mass at the Cathedral of St. Joseph in Hartford, Conn. (CNS photo/Aaron Joseph, courtesy Archdiocese of Hartford)

To be rector of the basilica at the time of Father McGivney's beatification, priest said, is "a joy and a privilege." 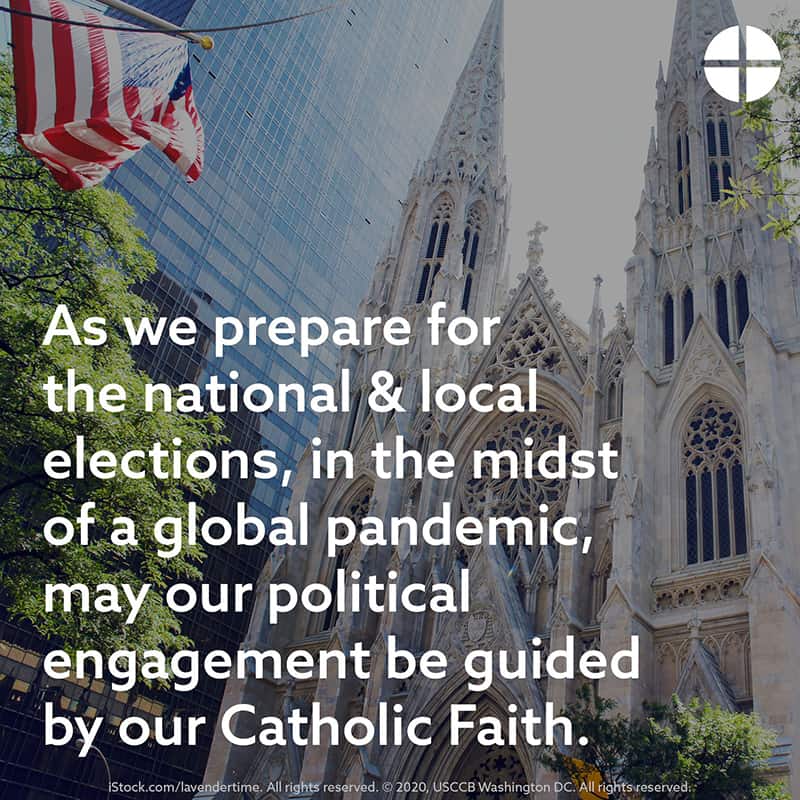 This is a graphic for the U.S. Conference of Catholic Bishops' "Election Novena." The bishops are encouraging people of faith to participate in a novena to prepare for Election Day and pray for the nation for nine days, beginning Oct. 26 and ending Nov. 3. A closing prayer for elected leaders will be offered on Day 10, Nov. 4, the day after the election. (CNS photo/courtesy USCCB)

Participants are asked to pray for specific intentions every day, starting with a prayer that ‘our political engagement be guided by our Catholic faith.’ 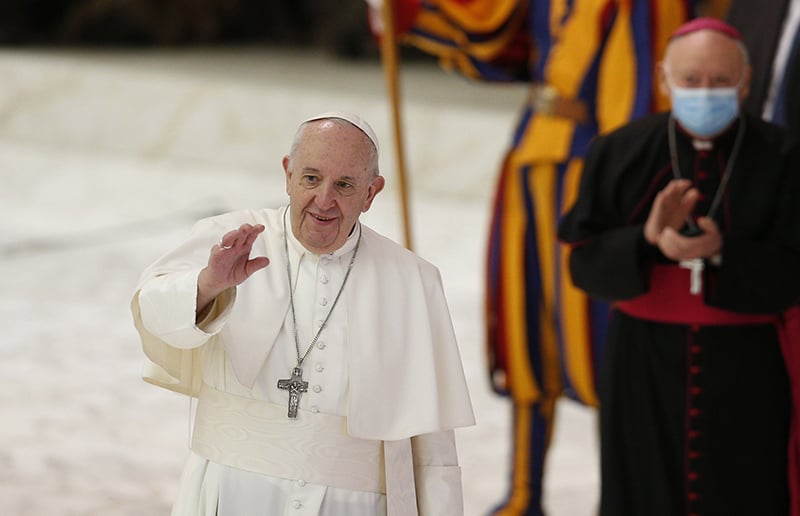 Pope Francis greets the crowd during his general audience in the Paul VI hall at the Vatican Oct. 21, 2020. (CNS photo/Paul Haring)

Pope Francis said in the documentary film, “Francesco,” that homosexual people “are children of God and have a right to a family.”

Continue Reading Pope has history of defending marriage, but being open to some civil unions 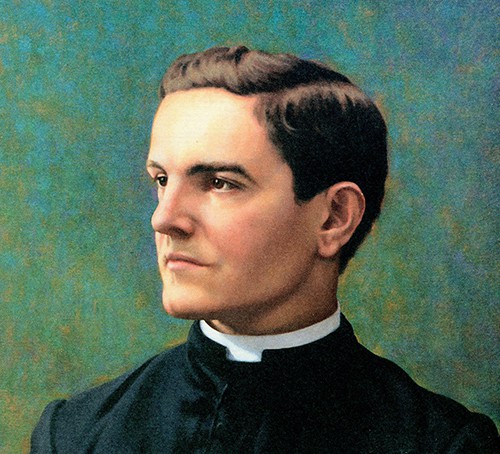 The beatification ceremony for Father Michael McGivney, founder of the Knights of Columbus, will be celebrated Oct. 31, 2020, in the Archdiocese of Hartford, Conn. Father McGivney is pictured in an undated portrait. On May 27 the Vatican announced Pope Francis had approved a miracle attributed to the priest's intercession, clearing the way for his beatification. (CNS file photo) See MCGIVNEY-BEATIFICATION-HARTFORD July 28, 2020.

The miracle that led to Father McGivney’s beatification was the 2015 cure of a boy in Dickson, Tennessee 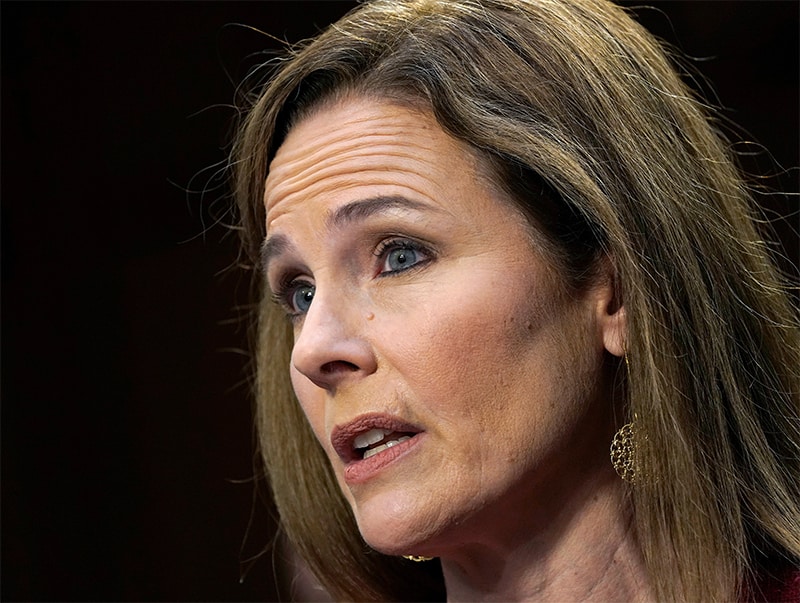 Judge Amy Coney Barrett of the U.S. Court of Appeals for the 7th Circuit, President Donald Trump's nominee for the U.S. Supreme Court, speaks during the second day of her confirmation hearing before the Senate Judiciary Committee on Capitol Hill in Washington Oct. 13, 2020. (CNS photo/Drew Angerer, Pool via Ruerters)

When asked if she would be able to set aside her religious beliefs to fairly decide legal cases, Barrett said she could. 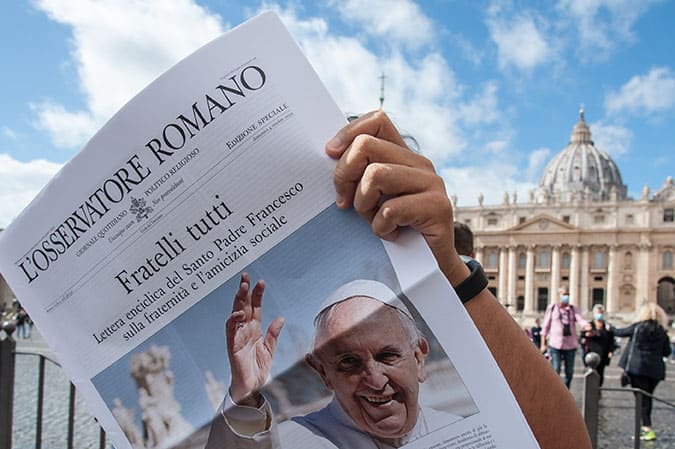 Free copies of L'Osservatore Romano, the Vatican newspaper, with the front page about Pope Francis' new encyclical, "Fratelli Tutti, on Fraternity and Social Friendship," are distributed by volunteers at the end of the Angelus in St. Peter's Square at the Vatican Oct. 4, 2020. The social encyclical extends a formidable challenge to us all, the challenge to create "a different culture." (CNS photo/ IPA/Sipa USA, Reuters) 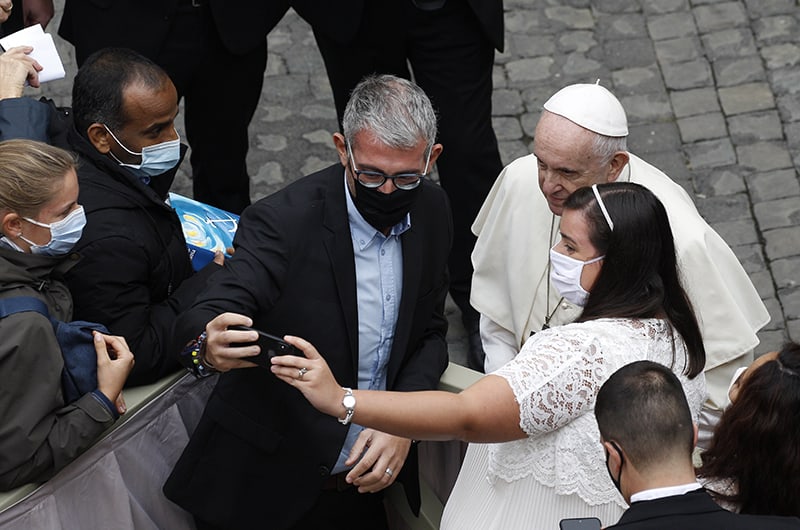 Pope Francis poses for a selfie with newly married couple during his general audience in the San Damaso courtyard at the Vatican Sept. 30, 2020. (CNS photo/Paul Haring) 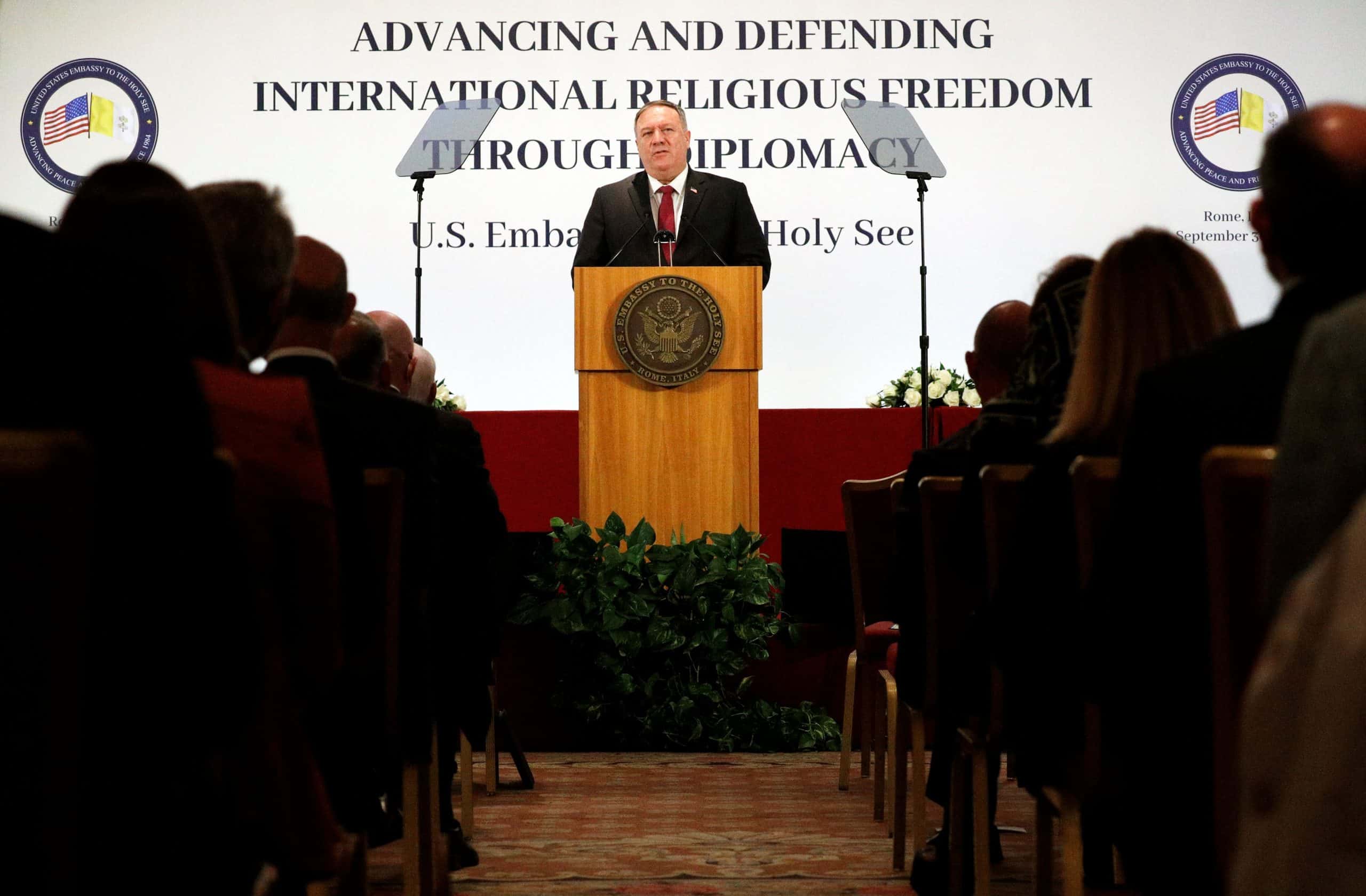 U.S. Secretary of State Mike Pompeo delivers remarks at a symposium on religious freedom in Rome Sept. 30, 2020. The symposium was sponsored by the U.S. Embassy to the Holy See. (CNS photo/Guglielmo Mangiapane, Reuters pool)

The respect for freedom of religion in the public sphere is a clear indicator of the health of any society," said Cardinal Parolin. 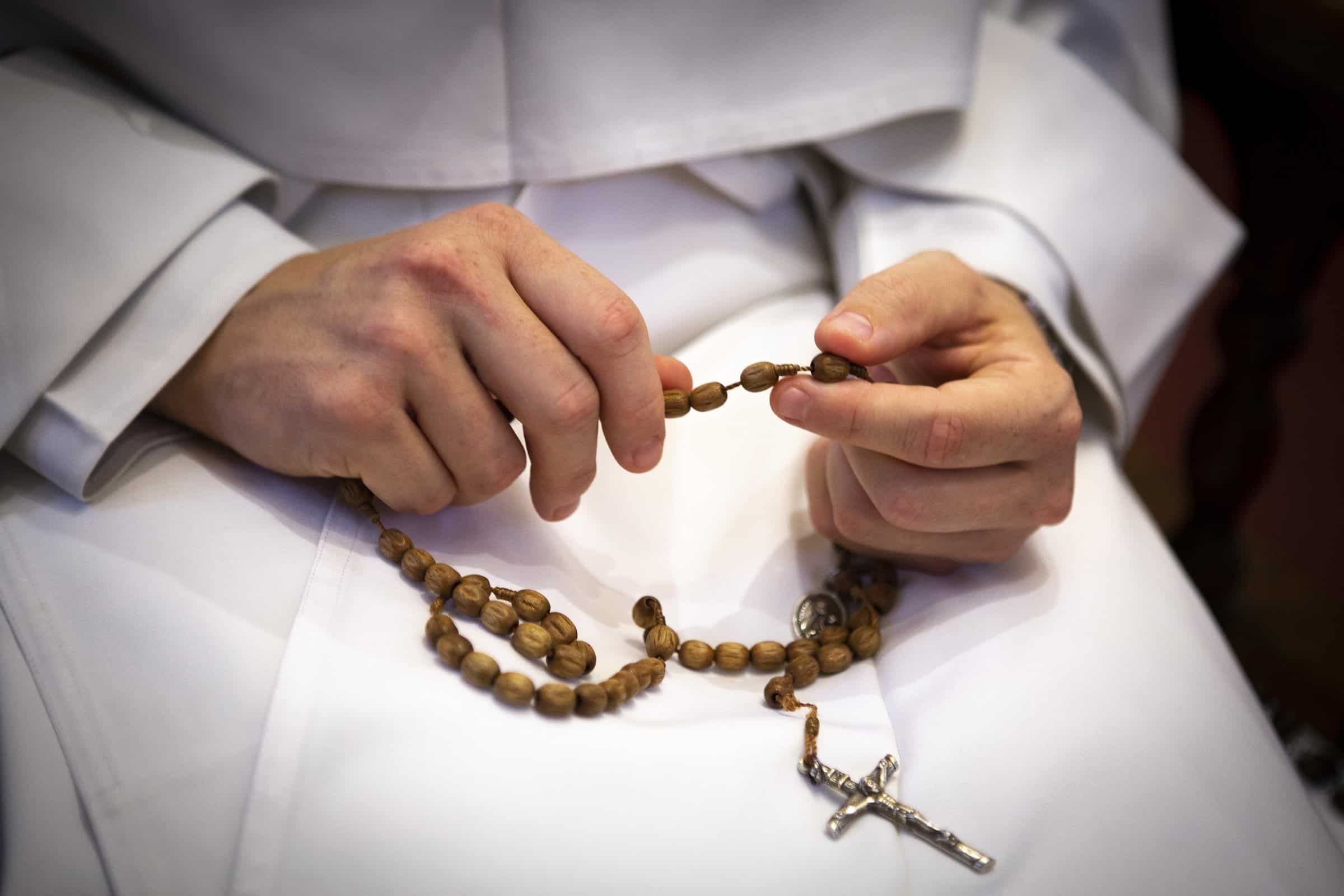 A Dominican sister prays the rosary Sept. 18, 2018, in a campus chapel at The Catholic University of America in Washington. The U.S. Conference of Catholic Bishops will host a virtual rosary event Oct. 7, which is the feast of Our Lady of the Rosary. The event will premiere on the USCCB's YouTube channel and its Facebook page at 3 p.m. Eastern time (12 p.m. Pacific time). (CNS photo/Chaz Muth)

The USCCB will host a virtual rosary event on the feast of Our Lady of the Rosary.