Couple serves as parish chairs of Legacy Campaign to give back

From Baptist to Catholic and volunteer to parish life coordinator, Carrie Melvin’s journey with her newfound faith in the Church has constantly been growing and developing. Growing beside that has been her desire to give back to her parish family at Our Lady of the Lake Church in Hendersonville.

After subsequently volunteering with several ministries, she joined the staff of Our Lady of the Lake as the administrative assistant in August 2019 and eventually the parish life coordinator in January 2021.

“I do love being on staff here. Being the parish life coordinator, I get to do so much for the church, planning big events and helping parishioners with their needs,” she said. “It is just about giving back and being here and witnessing all the good things that go on here.”

And now, she and her husband, Joe Melvin, are working to not just give back to Our Lady of the Lake but the Catholic Church in Middle Tennessee by serving as parish chairpersons for the Diocese of Nashville’s A Legacy of Faith, Hope and Love Campaign.

When Father Austin Gilstrap, pastor of Our Lady of the Lake, “first asked, I thought, ‘I’m not good at fundraising,’” Carrie Melvin said. “But when he explained what would come out of the campaign for Our Lady of the Lake specifically, I found that this is a big deal. This is important. We need to do this.

“He wanted this to come from people who really love the church,” she continued. “We can hype this up for the church because we feel so passionately about it.”

“Our Lady of the Lake has been through several campaigns over the last 20 years to build this church and then to add on to this church, so as we talked with some other people. I felt it was our time to step up in one of these campaigns,” added Joe Melvin. “It was another way for us to pay it forward in some way.”

And upon hearing the other campaign initiatives, they knew that the Catholics of Middle Tennessee as a whole would benefit as well.

The $50 million A Legacy of Faith, Hope and Love Campaign is a diocesan-wide fundraising initiative to build up endowments to support in perpetuity parishes, schools, ministries and agencies of the diocese.

The historic campaign, with the assistance of Steier Group, is raising money to create new endowments or enhance existing endowments to provide future revenue for five key priorities: individual parish needs; Catholic education; vocations; parish growth and expansion; and outreach to those in need.

The 25 percent for parishes is meant to be used at each parish’s discretion for any projects, upgrades, or debt relief as they see fit.

Our Lady of the Lakes’ parish shares will go towars several improvements, including a new sound system, new carpeting, lights in the parking lot, resurfacing the parking lot, construction for a new pre-school and more.

“You’re seeing a lot around not just … where we worship, but also things for the family,” Joe Melvin said, noting not just the pre-school but how the new parking lot lights will be helpful for late night Masses and events. “We want safety and security for the families and children of this church.”

The campaign is being rolled out at churches across the diocese in three waves, with a different group of churches in each wave. Our Lady of the Lake was part of the Wave Two kick-off in late March.

Since the kick-off, the Melvins, along with the more than 20 campaign committee members and volunteers, have been spreading the word amongst parishioners with announcements during Mass and in the bulletin, informational tables after Mass, and phone calls to parishioners. They have also recently started reaching out to the parish’s Hispanic community now that they have the campaign materials available in Spanish. And it is all so they can continue toward the church’s $3.1 million goal, which has already reached $1 million.

“I’m blown away by the response whether it is talking with people, whether it’s seeing the reports come in … and seeing that number move up every week,” Joe Melvin said. “The response has been fantastic.”

The work isn’t done yet either, which is why they’re planning a Call Night on Wednesday, June 22, to make those final calls to parishioners.

“It is almost like a mini telethon,” Joe Melvin explained. “We thought, ‘Let’s sit down together, get some pizza, have some fellowship, and knock these out.’”

But no matter what the approach to getting the word out, Joe Melvin said they never want to put pressure on parishioners.

“Each person has their own decision to make as part of this process. There is a lot going on whether it is the economy, people moving in, people getting ready to retire, so they have to make the right decision for themselves,” he said. “It is not a pressure phone call. We want the Holy Spirit to be engaged in this process and to move people. … We are just here to answer the questions and be part of the process.”

They said they want parishioners to be comfortable with whatever they feel they can give because “every little bit helps,” Carrie Melvin added.

And, as they said, they just want to give back to the parish that gave so much to them, especially as Carrie Melvin went through the RCIA process and they were looking for a parish to call home.

“This church really accepted us,” Joe Melvin added. “Creating that same environment for new families that come is something we’re really passionate about.”

“I’m really thankful” to everyone who has given to the campaign, the campaign committee members, and the volunteers “because this isn’t something that we could have done on our own,” he said. “Although we have been here four or five years now and built a lot of really good relationships, I’ve also met a lot of new people through this process, and I’m so thankful for that as well.”

Steier Group, a capital campaign fundraising firm out of Omaha, Nebraska, has assisted dioceses in similar campaigns all around the country. Corporate donations have covered the fees for Steier Group to assist the diocese in managing the campaign. 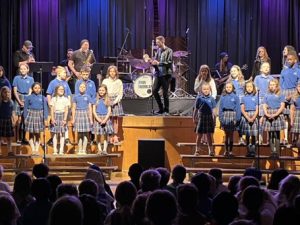