WASHINGTON (CNS) — The U.S. Department of Justice is urging the Indiana Supreme Court to dismiss a lawsuit filed against the Indianapolis Archdiocese by a Catholic high school teacher who was fired last year.

The Justice Department, in a Sept. 8 brief, argued the archdiocese was protected by the First Amendment and by a recent Supreme Court decision to determine who can teach students at religious schools.

The lawsuit was filed last summer against the Archdiocese of Indianapolis by a Cathedral High School teacher, Joshua Payne-Elliot, who said he was fired from the archdiocesan school because of his same-sex marriage. This school said it rescinded Payne-Elliot’s contract based on the contract’s morality clause.

In its 44-page brief, the Justice Department emphasized that “religious employers are entitled to employ in key roles only persons whose beliefs and conduct are consistent with the employers’ religious precepts, and, more broadly, that the U.S. Constitution bars the government from interfering with the autonomy of religious organizations.”

It also stressed that the “ministerial exception” aspect for teachers at religious schools, expanded upon in the recent Supreme Court decision in Our Lady of Guadalupe School v. Morrissey-Berrum, “shields from judicial review the archdiocese’s direction to Cathedral.”

The brief said the Cathedral High School teacher fit into the minister category because he had “the responsibility of educating and forming students in the faith.” It also said if the school continued to employ him, it would “interfere with the archdiocese’s public expression of church doctrine regarding marriage.”

Two other briefs — filed by the Indiana Attorney General Curtis Hill and a group of three university law professors — similarly sided with the archdiocese.

Hill said: “The suit should have been dismissed immediately under the First Amendment’s long-standing protections for church autonomy.”

Last year, after the teacher filed the suit, the archdiocese argued it should be dismissed because religious institutions should not be subjected to a court’s interference.

Marion Superior Court Judge Stephen Heimann allowed the lawsuit to move forward, saying he did not think the church was the “highest ecclesiastical authority” in a Catholic school’s employment decision.

Hill, in his Sept. 8 brief, criticized the judge’s decision saying his personal opinion played a part in it and that he “improperly interjected judicial power into ecclesiastical matters.”

The group of law professors, in their brief, similarly said this case was a religious decision, not a secular one, and should be left to the school and the archdiocese.

Becket, a nonprofit religious liberty law firm, is representing the Indianapolis Archdiocese in this case.

Luke Goodrich, Becket’s vice president and senior counsel said in a statement: “The Supreme Court has repeatedly recognized that religious schools have a constitutional right to hire ‘educators’ who support the schools’ religious mission. So, it is no surprise that both the United States and the state of Indiana are saying that the courts must protect this basic right. If the First Amendment means anything, it means the government can’t punish the Catholic Church for asking Catholic schools to uphold Catholic teaching.”

While stressing that “one’s (sexual) orientation is not a sin,” the archbishop said the issue involving the two schools “is about public witness of church teaching on the dignity of marriage as (between) one man and one woman. That is our church teaching.”

“In this particular case we’re dealing with, those are ministers in our church. Teachers, guidance counselors, other leaders, leaders of the schools and other leaders in the archdiocese are bound to live out these principles,” he said.

Payne-Elliot, the former Cathedral High School social studies teacher, is married to a teacher at another Indianapolis Catholic high school, Brebeuf Jesuit Preparatory School. Both schools were informed by the archdiocese last year that if they did not dismiss these employees, they would lose their affiliation with the archdiocese as Catholic schools.

Brebeuf did not fire its employee and the school lost its affiliation with the archdiocese, but the Midwest province of the Society of Jesus, which administers Brebeuf, has appealed this decision with the Vatican Congregation for Catholic Education. 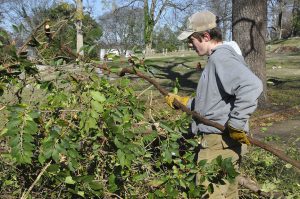