Jack Hagopian, a parishioner at St. Paul the Apostle Church in Tullahoma and one of the few Armenian Catholics in the Diocese of Nashville, is a proud American who served as an officer in the U.S. Army for 22 years.

But like Armenians around the world, a piece of his heart belongs to the homeland of his ancestors, wedged between Turkey, Iran, and Russia. That’s why he is so concerned about the recent fighting over the Republic of Artsakh, also known by its Soviet-era name of Nagorno-Karabakh, an autonomous Armenian ethnic enclave in Azerbaijan.

The conflict between Armenia and Azerbaijan has a long, often bloody, history. In the 1990s, in the wake of the breakup of the Soviet Union and several years of fighting, the people of Artsakh, an overwhelming majority of whom are ethnic Armenians, established the Republic of Artsakh as an autonomous region within the borders of Azerbaijan.

“With Armenian support, Artsakh was able to maintain its independence,” said Orthodox Bishop Daniel Findikyan, Primate of the Eastern Diocese of the Armenian Church of America, and a friend of Hagopian’s.

There have been periodic clashes between Azerbaijan and Armenia over the disputed territory since the 1990s, and violence erupted again on Sept. 27, when Azerbaijan forces, supported by Turkey, attacked Artsakh, seeking to reclaim territory they argue should be part of Azerbaijan.

“Armenians were just trying to go about their lives” when the attack started, Hagopian said.

A maternity hospital and Christian churches and pilgrimage sites in Artsakh and Armenia were bombed by Azerbaijan forces, and Azerbaijan and Turkey used American-made weapons and military hardware in the fighting, Hagopian said.

Thousands of soldiers and civilians on both sides died in the six weeks of fighting, which came to a close with a cease fire brokered by Russia. Under the terms of the cease fire, some of the territory of Artsakh will be ceded to Azerbaijan.

The agreement, signed by the prime minister of Armenia and the presidents of Russia and Azerbaijan, has prompted protests in Armenia.

“The Armenians were pushed into signing this,” Bishop Findikyan said. “They got nothing. … This is the Armenians’ worst nightmare.”

Bishop Findikyan worries about the future of Christian churches, monasteries and pilgrimage sites, some of which go back centuries, that are located in the land now under Azerbaijan’s control. “Those precious holy sites … are going to be destroyed. That’s just a matter of time.”

The Armenian diaspora around the world and the various denominations are raising funds to provide humanitarian relief to the people of Armenia and Artsakh.

Armenian authorities have reported nearly 2,500 of its country’s forces died in the conflict.

“When 2,500 or so young men even go to war, much less be killed in war, that means there’s no bread winner” for their families, Bishop Findikyan said. “The government is fragile and can’t provide aid. There are children going hungry right now.”

On top of the military conflict, Armenia is in the grip of a COVID-19 crisis with a 50 percent positive test rate, Bishop Findikyan said. “The hospitals are overflowing. The virus is just ravaging Armenia, so we’re trying to support that everywhere we can.”

Armenia has a long history with Christianity and is the first Christian nation, Bishop Findikyan said. “Armenians were the first people to officially proclaim themselves Christian in the late third, early fourth century, well before the Roman Empire and other countries,” he said.

“The one thing that ties the Armenians together is their Christian faith,” he said.

Azerbaijan’s attack on Artsakh, with the help of its ally Turkey, evokes painful memories for Armenians of the Armenian genocide in 1915.

“This is nothing less than the Turks trying to finish what they started in 1915,” said Hagopian.

Armenian Christians living within the boundaries of the majority Islamic Ottoman Empire, which included present-day Turkey and the Southern Caucasus, among other areas, were targeted and killed. The Turkish government acknowledges the deaths but disputes that they constituted genocide.

“That’s exactly what it was,” Hagopian said. “It was orchestrated by the (Ottoman Empire) against their own population.”

Estimates of the number of people killed vary, but Hagopian placed the number at more than 2 million. “That represented three-quarters of the (Armenian) population,” he said.

Hagopian and Bishop Findikyan see the most recent fighting as another attack on Christianity.

“What’s motivating it is ethnic cleansing,” Hagopian said. “If everyone stands by, they’ll be successful,” and a Christian nation will be lost. “I think that’s a sad thing to have happen.”

He wants Christians around the world to understand what is happening to Christians in Armenia, Hagopian said.

“What I’m concerned about is people need to be aware that the first genocide of the 20th century was against this Christian group,” he said. “We persevered through this but the lesson is genocide is unacceptable.”

“I don’t think genocide should be happening to anybody,” Hagopian added.

Bishop Findikyan, whose office is in New York, reached out to Cardinal Timothy Dolan of New York after the fighting began. “I called him right away, and said, ‘Your eminence, we need your help and support.’

“He has been truly a brother in Christ and a blessing,” Bishop Findikyan said. “I’m inspired by his response to this. … Cardinal Dolan has given every voice to spread the truth about what was happening in Armenia.”

Cardinal Dolan and Pope Francis have been among the Roman Catholic leaders who called for an end to the fighting.

Speaking at the “Ecumenical Service for Peace and Justice in Armenia, Artsakh and the World,” held Oct. 21, at St. Vartan Armenian Cathedral of the Eastern Diocese of the Armenian Church in New York, Cardinal Dolan called for “the shield of faith” to protect Armenian Christians caught in the conflict.

“Sometimes we believers are dismissed as naive and idealistic and unrealistic dreamers. Nonsense,” he said. Those who count on military might “are the Pollyannas, because these things never work. The shield of faith. The artillery of the spirit. That’s our strategy.”

“Jesus whispers to us this evening, ‘Take courage. I conquered the world,’” the cardinal said. 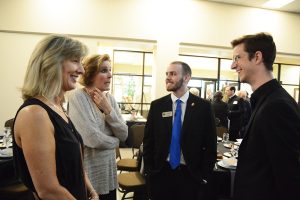 Support for seminarians is the ‘work of God’ [Photo Gallery]