St. Joseph School in Madison closed a week early for the Christmas holiday after a tornado and severe high winds, which hit Middle Tennessee in the early morning hours of Saturday, Dec. 11, damaged the building.

On Sunday, Dec. 12, Cardinal Pietro Parolin, secretary of state, released a letter on behalf of Pope Francis to the bishops of the affected dioceses.

“The Holy Father was saddened to learn of the devastating impact of the tornadoes that struck the central and southern United States in these days. He offers heartfelt prayers that Almighty God will grant eternal peace to those who have died, comfort to those who mourn their loss, and strength to all those affected by this immense tragedy,” the letter reads. “With gratitude for the tireless efforts of the rescue workers and all engaged in caring for the injured, the grieving families and those left homeless, Pope Francis invokes upon all engaged in the massive work of relief and rebuilding the Lord’s gifts of strength and generous perseverance in the service of their brothers and sisters.”

When Amy Lavender, St. Joseph principal, was first alerted with a pre-recorded message by the fire alarm company early Saturday morning, she said she wasn’t sure what to think. So, she reached out to Father Jean Baptiste Kyabuta, pastor of St. Joseph Church.

“From where he was (in front of the church and school), he just said, ‘Everything is good. We’re just out of power,’” Lavender explained.

But it was a different story later that morning as employees began to show up for athletic events and a Cookies with Santa event.

“They were like, ‘we’ve got bad damage,’” Lavender said.

Walking around to the back of the school, it was revealed that part of the gym roof was missing, there was flooding in the building, some windows were broken, and several power lines and utility poles had come down.

Additionally, the elm tree near the playground, which has been part of the school for decades, was also destroyed by the storm.

From kindergarten through eighth grade, “I went to school at St. Joseph, and the tree was about half the size then,” recalled Jackie Sullenbarger, first-grade teacher, who has been teaching at St. Joseph for 30 years in multiple grade levels. “It had just grown into this massive, beautiful creation of God … shading probably half the playground.

“It’s always been there,” she said, recalling her sadness in finding out the tree was gone. “For those of us that went to school at St. Joseph, we watched it grow,” she added, having graduated in 1980.

“The shade it provided for so many years to cool off the kids and the teachers. It was like the heart of the playground where everybody came,” Hatchett added. “I am just so sad about it.”

With all the visual damage, it didn’t take long to decide to cancel school for the final week of the semester.

“There is no power still, which is what led us to cancel school,” said Lavender, who is in her first year as St. Joseph principal. “And it appears that it’s more than just power lines.

“I’m sure I have a lot of happy middle school students right now (because) fifth through eighth grade should have had exams,” she said.

Once the damage was made known, Lavender said, the school started calling in professionals to further assess the situation.

“As soon as it happened, we started calling SERVPRO (Restoration Services) and roofers to start getting the water out of the building and tarping and putting a temporary roof on,” she said. “The classrooms seem to be fine, but we won’t know what we’re dealing with electronically until the power is back on. Who knows what has blown or not blown?

“But ultimately the tangled web of downed power lines, the downed utility poles in the back, and the roof debris, which is up in the trees as well, are our biggest concerns,” she added.

Despite the damage done to the school, Lavender and other faculty and staff are thankful that the storm happened when it did.

“Thank God it was on a weekend in the middle of the night, and there weren’t kids on campus or in the building because it would’ve been a really dangerous situation,” Lavender said. “Thankfully, too, in our community we haven’t heard of anyone who has lost homes. Everyone is safe and accounted for.”

Nanci Williams, who has taught pre-kindergarten at St. Joseph for the last 16 years, agreed.

“The news has always talked about how it’s so scary that storms like this come at night, but from the last few tornadoes, I think we should be so grateful that those come at night,” Williams said. “And the destruction of our school doesn’t even compare” to damage done to other schools during the March 2020 tornado.

Lavender said she is also grateful for the outpouring of community support.

“We’ve had so many people from the community, alumni and parishioners wanting to help and so anxious to help,” she said.

Parishioners of Our Lady of the Lake Church in Hendersonville also experienced damage from the storms including tree damage and continuing power outages, but Carrie Melvin, parish life coordinator, said all parishioners are safe and unharmed, and no home was destroyed. 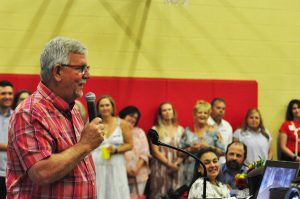 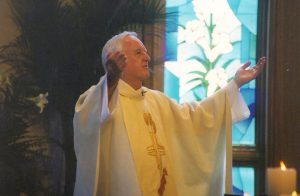