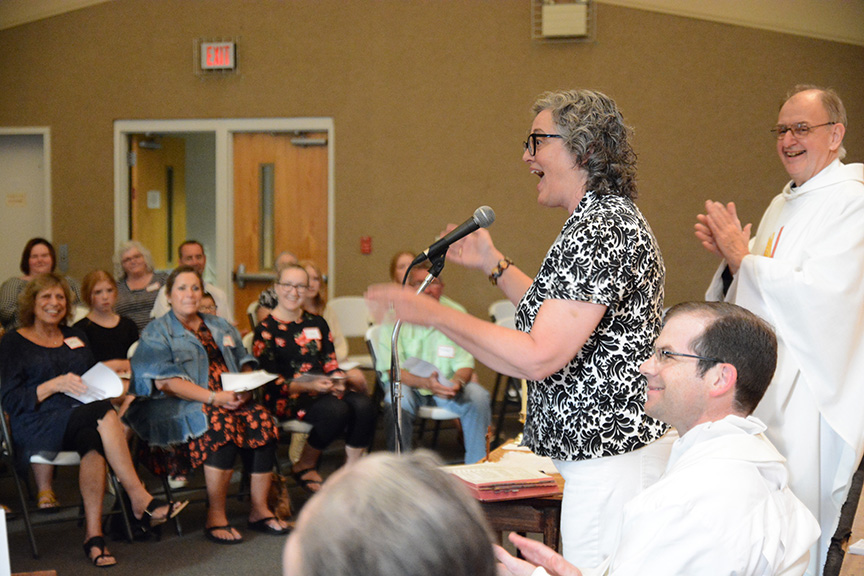 A group of Catholics interested in starting a church in Smith County celebrated a Mass, followed by a meeting to discuss their plans, at the Carthage United Methodist Church on Thursday, June 24, 2021. It was believed to be the first-ever public Catholic Mass celebrated in Smith County. 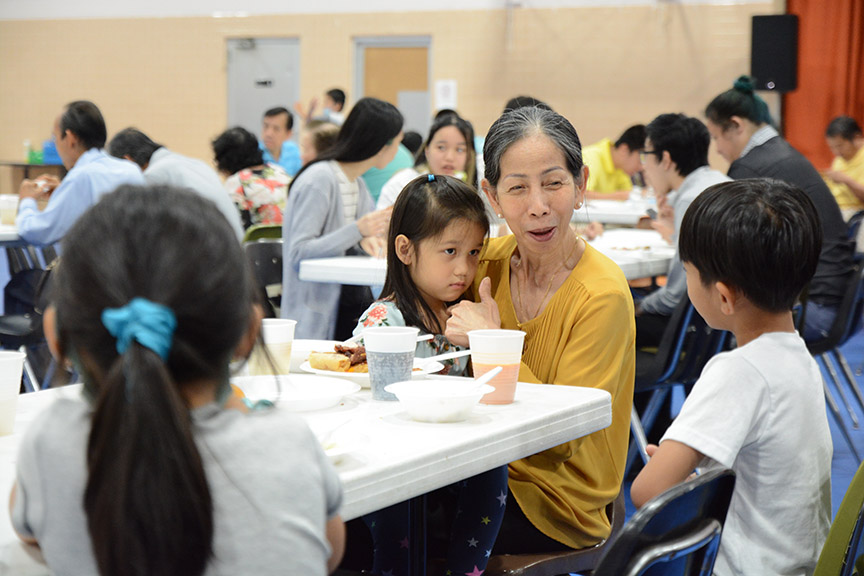 The Vietnamese Catholic Community celebrated its move to St. Pius X Church in Nashville with a luncheon on Sunday, June 6. In the Mass before the luncheon, three children received their First Communion. The community moved to St. Pius from St. Martha Church in Ashland City earlier this spring because it is more accessible to more people. Members of the community travel from throughout the Nashville area for Sunday Mass in Vietnamese and religious education classes for their children and other ministries and services. Father Hung Pham, a native of Vietnam, is the chaplain for the community. 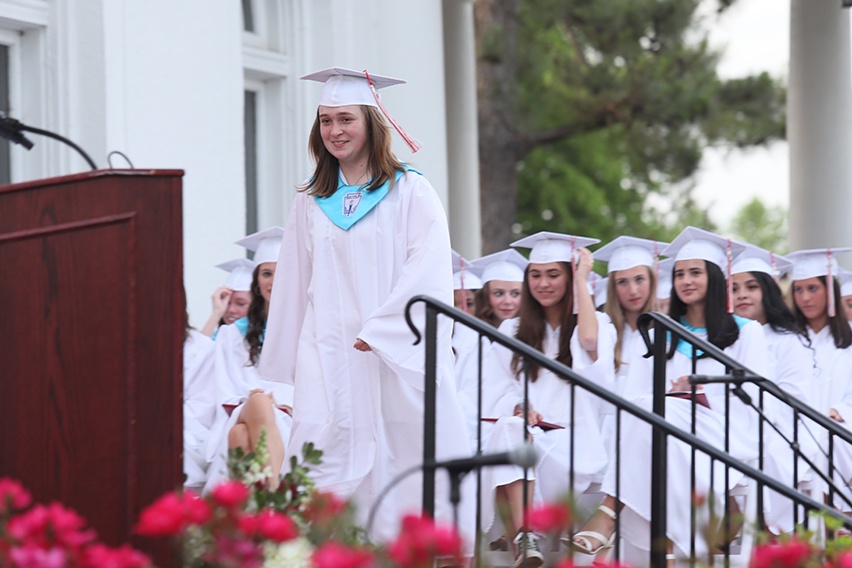 The Class of 2021 at the three Catholic high schools in Nashville – Father Ryan, Pope John Paul II and St. Cecilia Academy – capped off their high school years with graduation ceremonies this month. Father Ryan graduate Annabel Feltner, top left, captures the moment with a selfie with her mother after graduation on Saturday, May 15. Valedictorian Emily Phan and Salutatorian Grey Wilder led their 221 classmates through the graduation ceremonies. Keonna Chumbley and Jakob Briggs, top right photo, celebrate their graduation from JPII on Sunday, May 16, with their 152 classmates. St. Cecilia’s graduates, at right, clutch their diplomas as they leave the school’s commencement exercises on Friday, May 21. 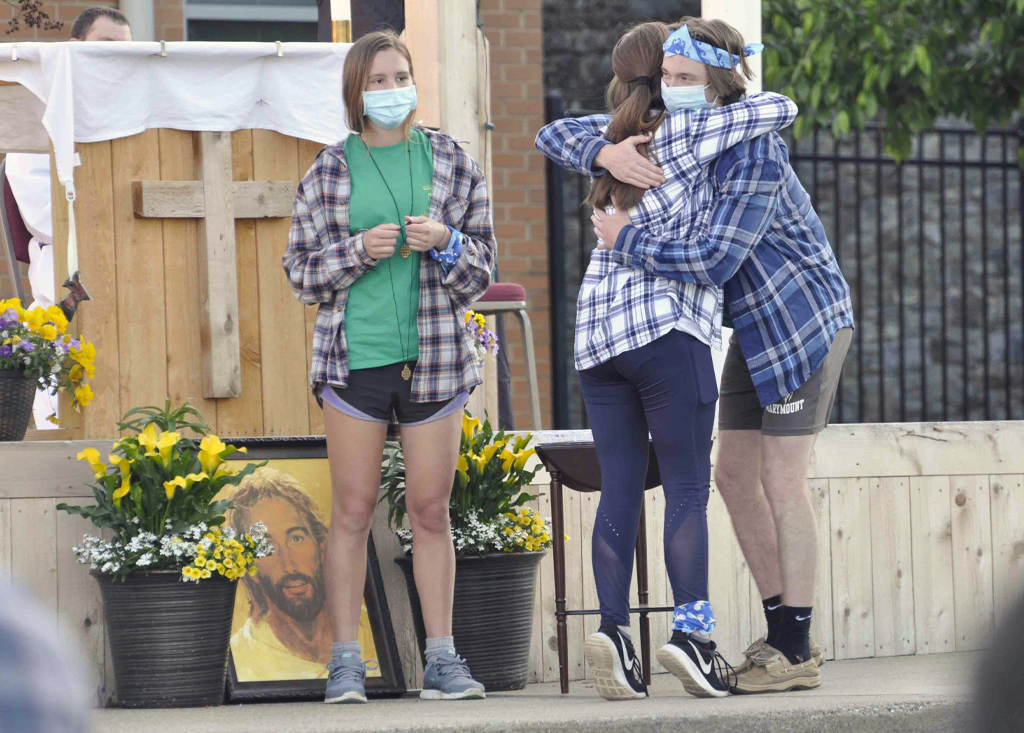 Hundreds of past SEARCHers filled the parking lot of St. Henry Church on Sunday, April 25, for a joyful closing Mass of SEARCH 365 and the 50th anniversary celebration of the retreat program for high school students.

The SEARCH retreat is “transformative,” said Father Andy Bulso, the chaplain for the Diocese of Nashville’s Office of Youth and Young Adult Ministry and a past SEARCH participant, because it’s where many young people begin to know Jesus as “someone who knows and loves each one of us.”

Developing an authentic relationship with Jesus, beyond a theological or historical understanding of him, and realizing “the love that God has for each one of us” is at the heart of the SEARCH program, Father Bulso, who was the principal celebrant of the Mass, said in his homily.

The Diocese of Nashville’s SEARCH retreat program is open to high school juniors and seniors and is typically held at Camp Marymount in Fairview one weekend a month during the school year. It features talks and group discussions on a variety of subjects, led by teens who have already completed the retreat.

It’s an enduring and popular fixture in the diocese, with all weekends during the 2020-2021 school year operating at full capacity.

“SEARCH is an experience in encountering Jesus Christ, which will assist you in living a Christian life as you enter into young adulthood,” according to the diocesan youth office’s SEARCH page. “SEARCH aims to ignite the disciple in each participant to go forth and proclaim the good news — the Gospel!”

Before he made SEARCH 360, Cullen Mnich, a parishioner at Our Lady of the Lake Church in Hendersonville, said he regularly attended church with his family, but “I wasn’t really paying attention,” he said. “My relationship with God just wasn’t really there.”

A reluctant SEARCH participant, Mnich said once he arrived for his first retreat weekend, “I knew I would only get out what I put into it. … I decided to open up and make it my environment to thrive and enjoy.”

Mnich has indeed thrived in SEARCH, asked to be a leader for SEARCH 363 and co-director for SEARCH 365, one of the top leadership positions for Catholic youth in the diocese.

He said SEARCH has motivated him to “pray and enjoy the sacraments more.” It’s also given him a network of like-minded teenagers who “stick with you through everything.

“It’s given me a lot of people in my life I feel like I can always talk to,” he said.

That real connection with others is one of the hallmarks of SEARCH, Father Bulso said in his homily. SEARCH, he said, “empowers our lives and our love for each other.” The emotions and connections of the retreat weekend “are some of the most real things you can ever experience,” he said.

Over 50 years, there have been 365 SEARCH weekends with an estimated 15,000 participants. The late Father Ed Arnold brought the SEARCH retreat to the diocese and held the first retreat in April 1971 at the “Graystone Building” where the Fleming Center at the Cathedral of the Incarnation now stands.

Since then, very little about SEARCH has changed, and to many people, that’s what makes it so appealing.

“I saw it work, and it just continued to work,” said the former longtime SEARCH director Sally Corby. “If you see something going good, why change it?”

Many young SEARCH alumni attended the closing Mass on April 25 and enjoyed a reception after, reconnecting and looking through old photo albums of past retreat weekends, many of those memoires compiled and preserved by Corby.

She witnessed thousands of teen-agers experience SEARCH, and still cherishes the experience and the impact the SEARCH can have on young people. “I just loved being with the kids,” she said. “Real conversions happen.” 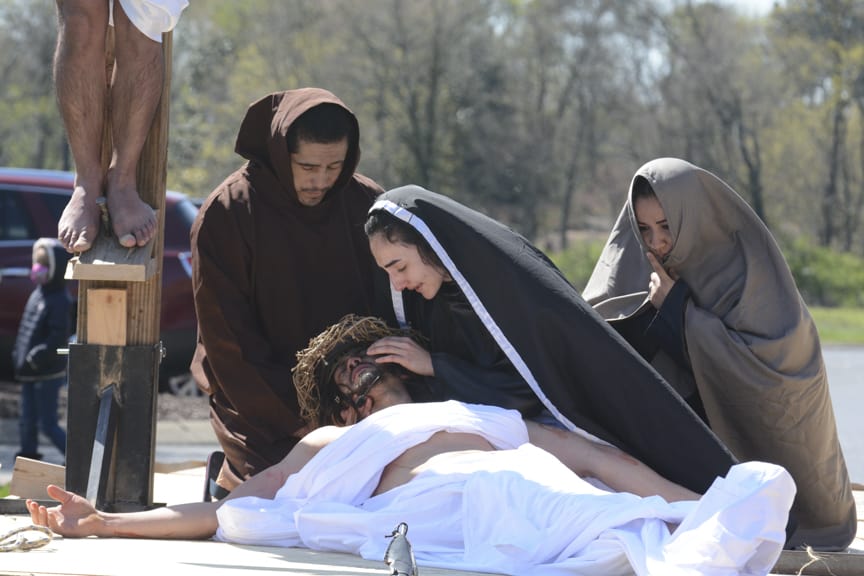 In 2020, the COVID-19 pandemic threw a pall over the Easter and Holy Week liturgies, the apex of the Church’s liturgical year.

But this year, the Diocese of Nashville celebrated the resurrection of Jesus Christ with a resurrection of its own as a surge of parishioners returned to in-person celebrations of Holy Week and Easter liturgies and services.

“It felt like we had a year-long Lent that ended with a beautiful Easter,” said Father Austin Gilstrap, pastor of Our Lady of the Lake Church in Hendersonville and Vocations Director for the diocese. “It made that weekend so much more beautiful and sweeter.”

People have been gradually returning to in-person Masses throughout Lent, pastors reported. And some parishes were near capacity with social distancing protocols in place.

“We had standing room only at the 11 a.m. Mass on Sundays and almost for the 8:30 Mass for months,” said Father Michael Fye of St. Ann Church in Nashville. “I expected maybe a 20 percent jump for Easter. I think we had something like an 80 percent increase.”

“I think it’s probably a combination of people saw less threat from the virus, but also people being really hungry to come back to Mass in person to receive the Eucharist,” said Father Justin Raines, pastor of St. Christopher Church in Dickson and dean of the Northwest Deanery for the diocese.

There was a surge in attendance for Palm Sunday after Bishop J. Mark Spalding lifted the dispensation from the obligation to attend Mass on Sundays and Holy Days.

“People looked to the bishop for assurance that now it was safe to come back,” Father Gilstrap said.

“Everything started on Palm Sunday. We saw so many people excited,” said Father Jean Baptiste Kyabuta, pastor of St. Joseph Church in Madison. “We even ran out of palms. That was a good beginning.”

The growing number of people returning to in-person services continued throughout the Triduum, climaxing with the Easter Masses.

Father Gilstrap was appointed as Our Lady of the Lake’s pastor in July 2020, in the midst of the pandemic. The Easter crowds were the largest he’s seen since becoming pastor, he said.

Easter and Holy Week this year was a sharp contrast to 2020 when the pandemic forced the suspension of public liturgies.

“It was surreal and sad last year,” Father Gilstrap said.

“Parishioners felt we had deserted them,” Father Kyabuta said. “Is the Church afraid? Who’s going to give us comfort?”

It was sometimes hard to explain that the decision was made to protect everyone, he said. When the diocese announced guidelines for the resumption of public celebrations of Mass last spring, “that was very helpful,” Father Kyabuta said. “I felt some unity and mutual understanding and support.”

“Being able to baptize those catechumens at the Easter Vigil, their witness was incredible,” Father Gilstrap said. “Even with COVID they worked very hard to learn the faith. I thought that was a beautiful witness from them.”

Even as more people return, parishes will continue with safety protocols such as wearing masks, using hand sanitizer, and cleaning the church between Masses.

“We’ve been able to see our precautions worked over the last year,” Father Gilstrap said. “Ultimately we’re following the people’s lead about what they’re comfortable with.”

Public celebrations of the liturgies of Easter and Holy Week returned this year with people all across the Diocese of Nashville returning to churches to worship together. There were no public celebrations of the Holy Week and Easter liturgies in 2020 because of COVID-19 restrictions. Bishop J. Mark Spalding restored the obligation to attend Mass on Sundays and Holy Days in time for Holy Week this year, and parishes saw an increase in attendance. The Triduum began on Holy Thursday with the celebration of the Mass of the Lord’s Supper. Parishes marked Good Friday with the Veneration of the Cross and Stations of the Cross. Holy Saturday saw the Easter Vigil Mass celebrated, during which people joined the Church. And on Easter Sunday, the Church celebrated the Resurrection of Lord. Photos by Rick Musacchio, Theresa Laurence and Andy Telli 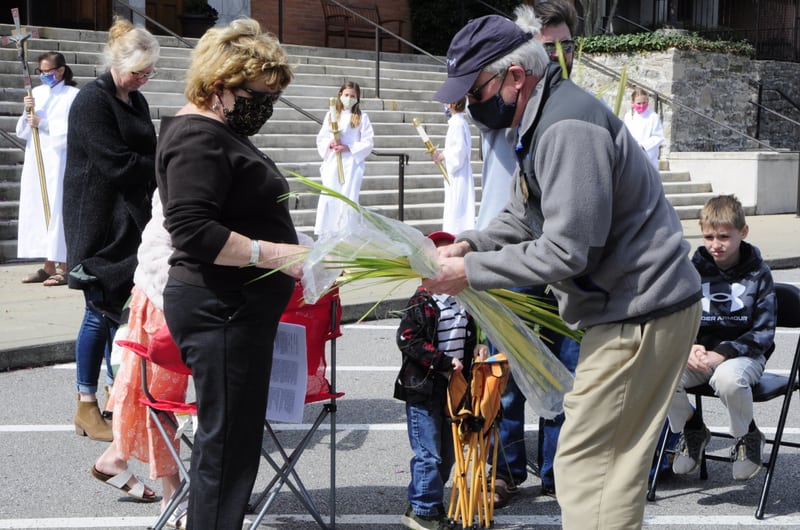 Parishes across the Diocese of Nashville welcomed more people back to church on Palm Sunday, the first day that Bishop J. Mark Spalding restored the obligation to attend Mass on Sundays and Holy Days.

At parishes large and small, indoors and out, people gathered for Mass on March 28, eager to experience the first Holy Week liturgy together in person. At the start of the coronavirus pandemic last year, all churches were closed during Holy Week; liturgies were livestreamed as priests celebrated them in private.

For Palm Sunday 2021, church communities were able to celebrate together again.

At Our Lady of Lourdes Church in Springfield, approximately 150 people attended the Palm Sunday 10:30 a.m. Mass in English, which was typical for that Mass. Even more were expected for the Spanish Mass later in the day.

About 600 people attended the 11 a.m. outdoor Mass at St. Henry Church in Nashville, which was also typical attendance in recent weeks. The parish is holding as many Holy Week liturgies as possible outside this week, and taking reservations for indoor Masses. They expect more people to return for Easter Sunday. 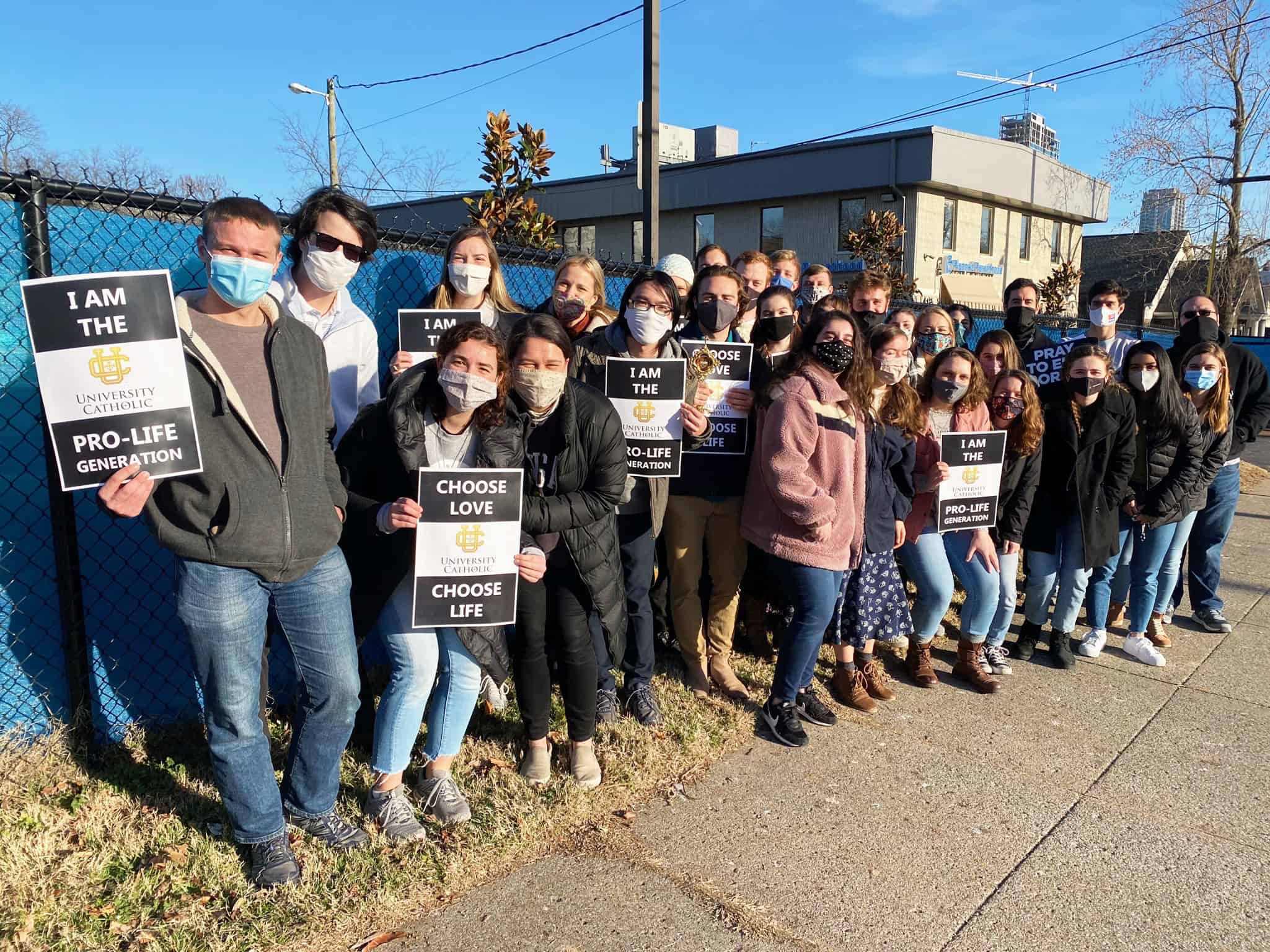 The Diocese of Nashville’s Office for Youth and Young Adult Ministry hosted the first-ever ‘48 Hours for Life: Nashville’ Jan. 29-31, coinciding with the annual March for Life weekend.

High school students from around the diocese participated in a weekend of activities centered around the Catholic church’s teaching on the sanctity of life at all stages.

The weekend opened with a Mass at the Cathedral of the Incarnation celebrated by Bishop J. Mark Spalding, followed by a talk by U.S. Senator Bill Hagerty. 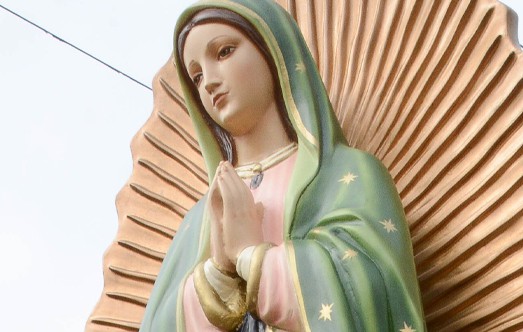 Our Lady of Guadalupe, honoring the Virgin Mary, is one of the most important feast days of the year for Catholics of Mexican descent, a celebration of faith and national identity. Special Masses were held this year in the Diocese of Nashville, but festivities were restricted by the pandemic. Parishioners at Our Lady of Guadalupe Church in Nashville attended one of five Masses celebrated at the church on the feast day, Saturday, Dec. 12. The parish held so many Masses to spread out the crowds attending Mass on the popular feast day. Bishop J. Mark Spalding  celebrated one of the Masses. 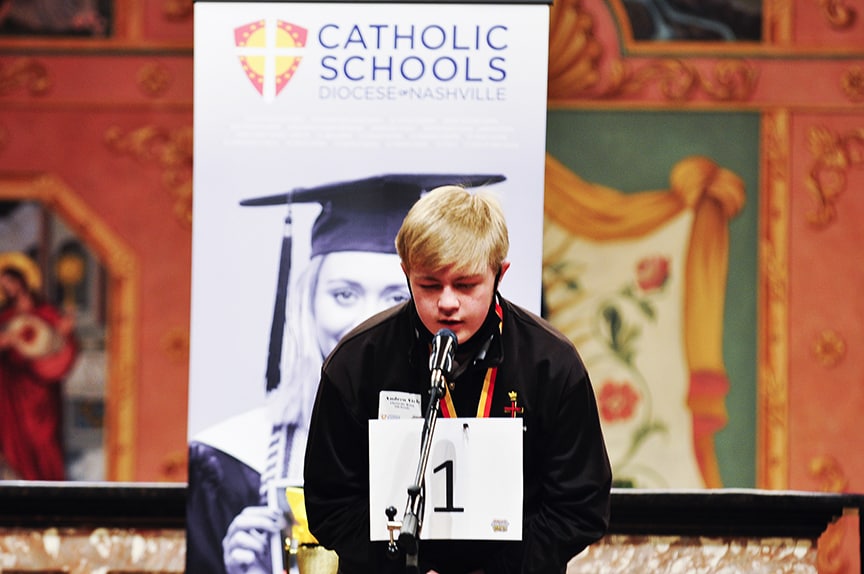 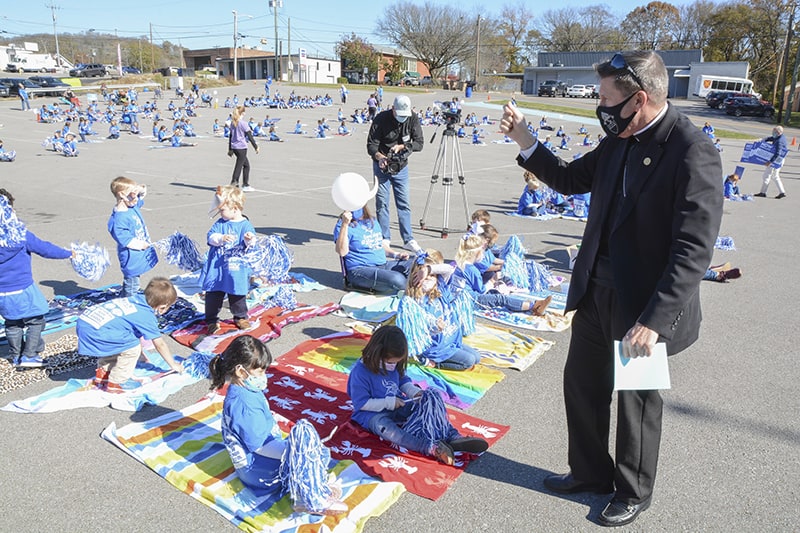 Holy Rosary Academy celebrated its recent designation by the U.S. Department of Education as a Blue Ribbon School with the community on Friday, Nov. 13. The festivities included the reading of congratulatory proclamations, resoultions and letters from the State House of Representatives, the Metro Council and Nashville Mayor John Cooper’s office. Terry Grewe, a 1977 graduate of Holy Rosary Academy and a successful businessman in St. Louis, Missouri, spoke to the students who were socially distanced in the school parking lot, urging them to keep Jesus at the center of their lives.